If you landed in this article is because you already are aware that testing your projects is important.

Also, you might already be aware that testing in WordPress is hard, very hard, since it has hundreds upon hundreds of functions that you need to Mock to make your code work.

Finally, you might also be ware that setting up testing in a project that uses a databases is something that can be complex for the amount of non portable configuration it involves.

Well, you are in the right place, because here I'm going to show you how to configure testing in you WordPress plug-in using nothing but docker so you can distribute your environment with your team or move it to a new machine easily.

Even though you the final environment is pretty portable, you still need to install a couple of pieces of software, being the more obvious Docker

For this example we're going to test a very simple WordPress plugin. And the beauty of our current approach, is that you can create this plug-in wherever you want. You don't need a WordPress installation nor a database or an Apache server.

So create an empty directory...

And then create the plug-in file itself.

We are going to do a very simple plug-in that provides the tdd-shortcode shortcode making sure that it uses some native WordPress functions. For that we just need to create the file wordpress-tdd-pluging.php in our directory with the following content:

Right from the start you can see that this plug-in is going to be somewhat difficult to test since it uses the get_option and add_shortcode WordPress functions. But that's something we're going to solve in the following steps.

And by Application Server I mean the Docker Container that will run Apache and PHP (not MySQL). And for that we'll create our first Docker image using the following Dockerfile

This will create a "Virtual Machine" (Is not a virtual machine but it helps to think of it as one) based in the official Docker WordPress image with 3 modifications:

To convert this file to something we can run, we need to create an image. This is achieved with the following command:

Note that I'm building the image with the wp-tdd-image tag. 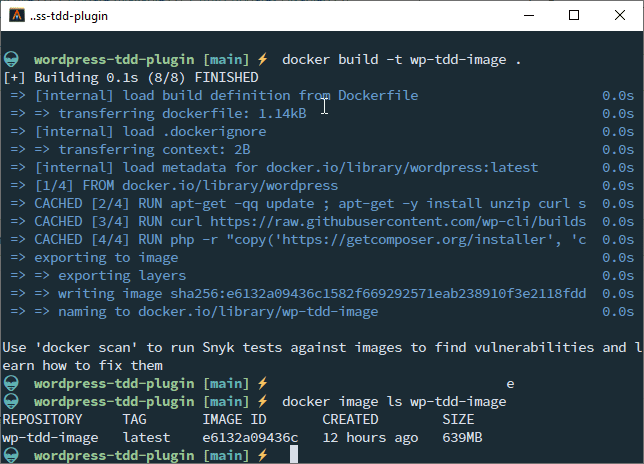 This creates the Docker Image, but it doesn't run it. For that we need to execute it:

And to verify that is actually running, visit http://localhost:8080. Do not run the installer. It will fail since we still haven't provided a database. 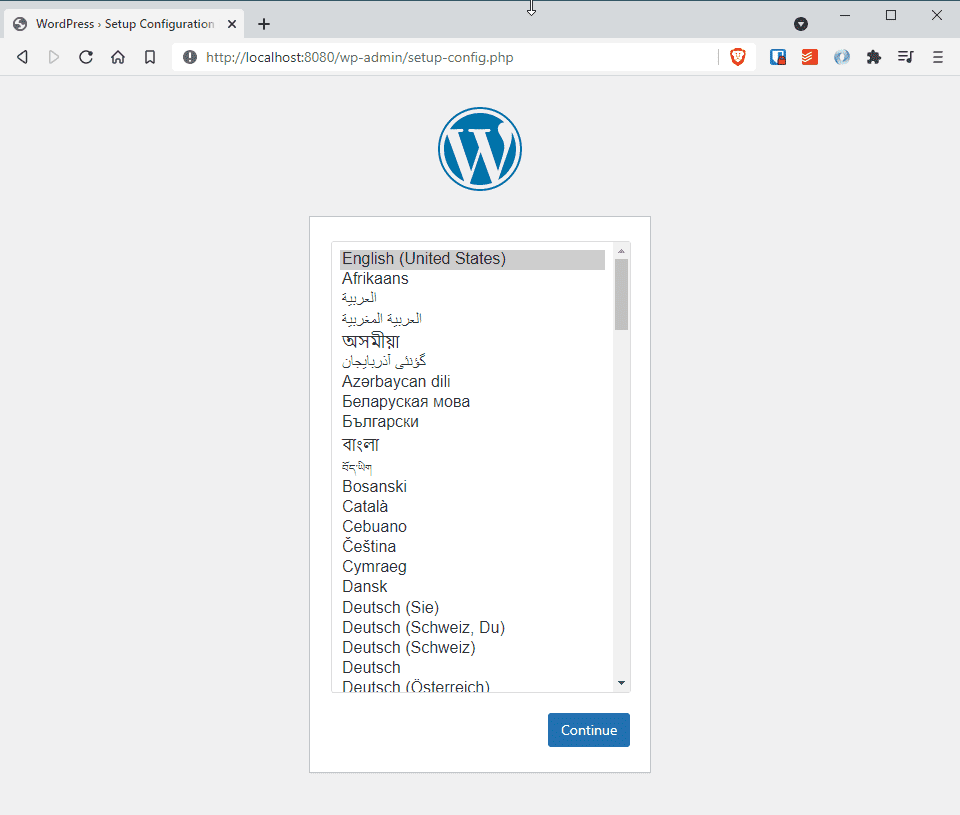 Now that we know that the Dockerfile works, we can remove the image with

Instead of adding a database to our current image (aka current virtual machine), we're going to use an already created image. But for that to work we have to use docker-compose which requires the new file docker-compose.yml:

Let's explain a little this docker-compose.yml. First the part of the MySQL image:

Now, for the WordPress image, I'm telling docker-compose to use the Dockerfile and:

Finally, let's install WordPress by starting this environment a visiting http://localhost:8080 to get the WordPress install wizard 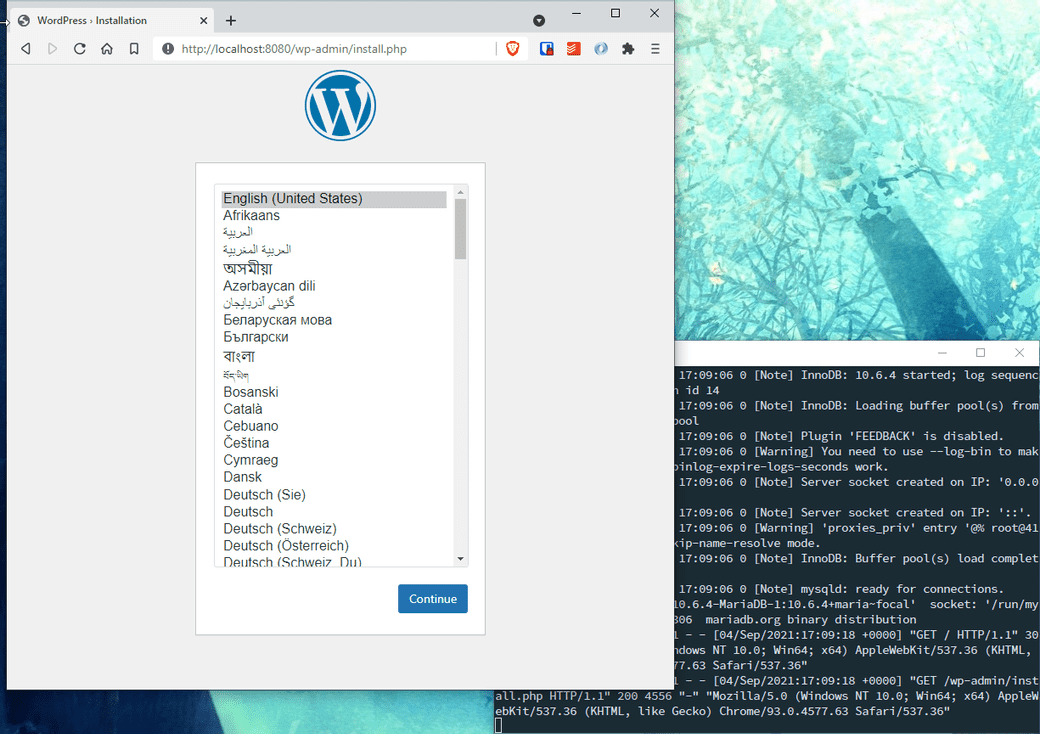 Now you can install WordPress and verify that the plug-in is present and valid by visiting your http://localhost:8080/wp-admin/plugins.php page:

This is why I love Docker... It saves me the trouble of installing those tools in my machine. Also, it guards me from running into compatibility issues since every development environment is completely isolated from any other project you have.

This is the challenging part. Not because is hard, but because it has a couple of tricks.

If you read carefully the Dockerfile we used to setup wordpress, you might have noticed that we installed wp-cli and composer inside the image. The reason for that is so we can:

So, open another terminal (since the docker-compose is using the one you previously had) and execute the following:

wordpres-tdd-plugin is the name of our current plug-in

This command is supposed to scaffold, or initialize, the testing files in your plug-in directory. The docker-compose exec wp part of the command is to have it be executed inside the current running container.

It fails... The reason being that the Docker container is trying to execute the command as the www-data user and your local machine either does not have that user, or that users exists but doesn't have write access to your directory.

To solve this issue, we have to do our first trick:

This time it works! And now we should have the following structure:

We still don't have tests, or even WordPress mock functions. But at least we have the means to create them.

What the docker-compose exec wp wp-cli scaffold plugin-tests wordpress-tdd-plugin command does is:

Believe it or not, we are not ready to start testing!

We have all the required files in place, but we still have to create a WordPress Testing Environment in our docker container. And for that we need to update our Dockerfile:

The changes are at the bottom, and we're basically telling the wp image to copy the bin/install-wp-tests.sh files inside the container and execute that command upon container creation.

So, stop the containers by typing Ctrl-c in the terminal, and the rebuild the wp image with:

In the last step we added the install-wp-tests command to our container. Now we have to execute it so it re-creates the WordPress testing files but with access to our database:

What this does is to create a "mock" WordPress inside the container in the path /tmp/wordpress. This will enable us to make tests without the need to mock get_option and add_shortcode, or any other WordPress function, ourselves.

Then we need to install PHPUnit in our plug-in directory but using the same trick of creating empty files:

Notice that we are using PHPUnit version 7 since that is the current version that WordPress supports.

We're almost done with the setup. We just need to add a new scripts in our composer.json file so we can run our tests easily:

And edit the phpunit.xml.dist file, enabling the sample test:

And we're done with the setup. Now let's actually verify that we can test our plugin

At the beginning of this article, we created a simple plug-in with a custom function that we wanted to test. We're finally ready to verify that function by creating a test.

So create the tests/test-tdd-shortcode.php file with a custom test:

The name of the file has to start with test-

Notice that we introduced an error. The last line of the function is a false assertion that will help us to verify that the tests are actually being run.

Les verify that by executing 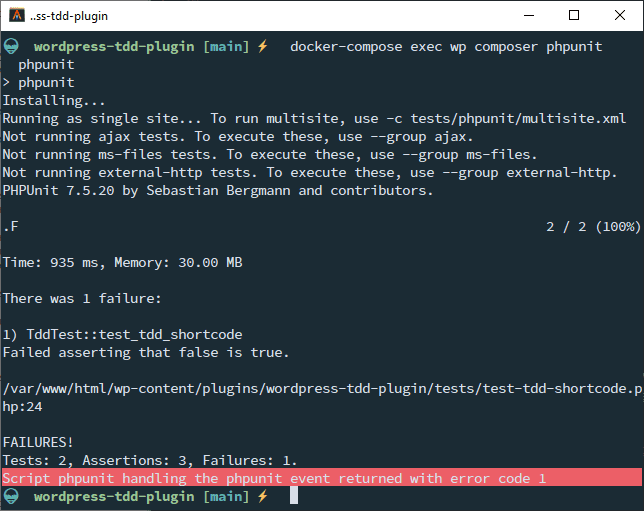 And even tough that last assertion fails, we are certain that our tests are being run.

Also notice that we used the add_option function. That's a WordPress function. So we are certain that our tests are using the WordPress test suite.

We're done for this article. But if you want to dig deeper into WordPress testing I recommend reading the following blog posts

And if you want to take a look at the generated files for this article, you can visit the GitHub repo