We are developers... right?

Well, maybe you aren't, but I am... And one thing that has bugged me for the last couple of years, is creating presentations using Office tools like MS Power Point, Libre Office Impress or Google Slides.

Don't get me wrong. I think all of them are terrific pieces of software. They make any user's life easier and offers a myriad of tools so you can compose your documents in a snap, specially presentations.

And as developer I would like to create presentations that can be tracked using version control, that you can change themes easily, that you can reuse and fork, and most of all, something that can be done trough code not using a graphical interfaces.

With MDX Deck you can create presentations using only MDX!

Wait a minute, what is MDX?

MDX is an authorable format that lets you seamlessly write JSX in your Markdown documents. You can import components, such as interactive charts or alerts, and embed them within your content. This makes writing long-form content with components a blast 🚀. -- MDXJs:

This basically means that you can do something like this:

Note that MDX is alternative way to create React components. And not a replacement for Markdown. So to use MDX you need to create a React project or include React in your project with Webpack or Rollup.

Now that we know what MDX is, we can start talking about MDX Deck.

MDX Deck is a React Project that allows you to create React based presentation decks, that can be published in web servers since the output is HTML and JavaScript (heard of the JAM Stack before????) but that are created using mdx components and not JavaScript ones.

The great thing about MDX Deck is that it does all the heavy lifting of creating a React app, bundling all the required libraries (like syntax highlighting and steps libraries) and does the initial configuration so you can focus on the content creeation using Markdown.

All right, let's get our hands dirty an lest create a new presentation using MDX Deck. For that we need to create a new node project with npm init or yarn init.

I'll be using yarn since I think is faster 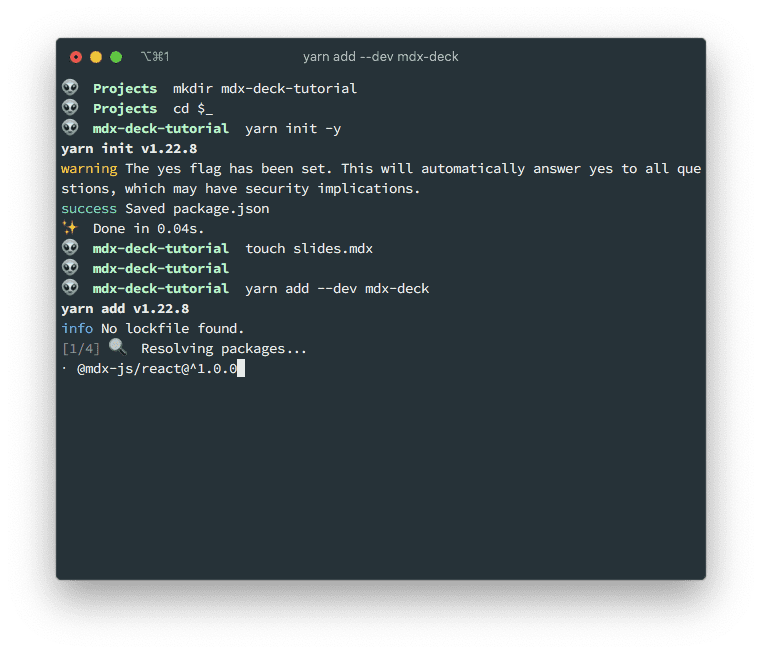 If I list the contents of the current folder, minus the node_modules dir, I will get the following structure:

Since accesing the mdx-deck command using ./node_modules/.bin/mdx-deck is a pain, we'll be creating a new start script in the pacakge.json file to execute it for us.

The mdx-deck comand requires the name of the .mdx file to execute. That's why I appended the slides.mdx at the end. Because that's the name that I selected for my presentation.

First slides of your presentation

Before we create the slides of our presentation by adding content on the slides.mdx file, there are some things that you have to take into account:

Now that we know that, lets add the following content to our slides.mdx file:

And execute yarn start to start the local development server and see your first 3 slides: 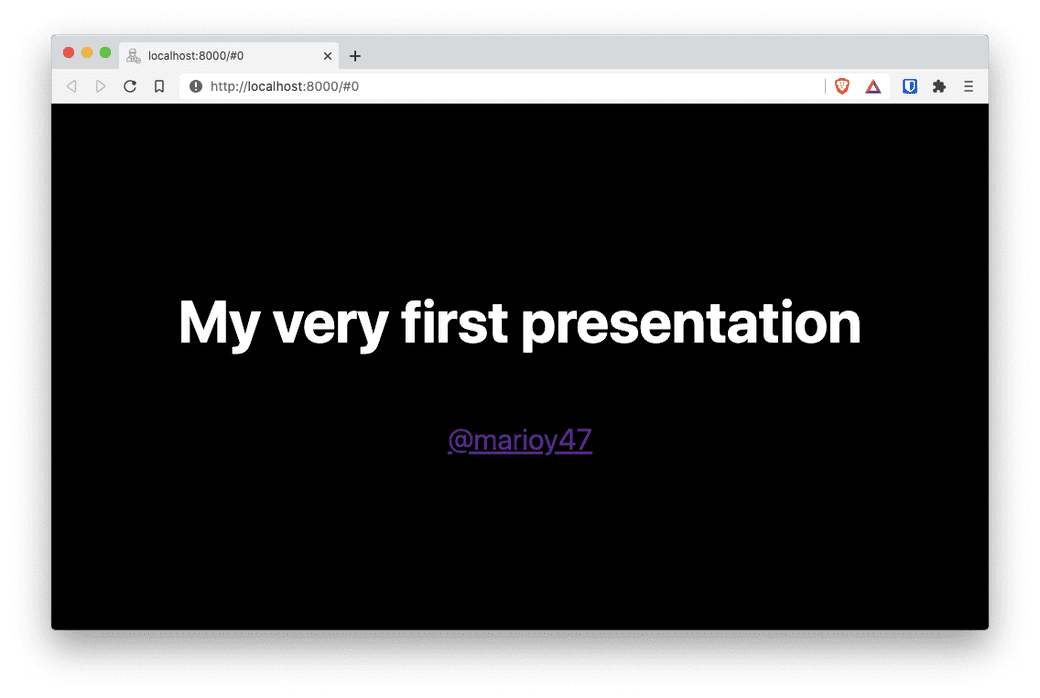 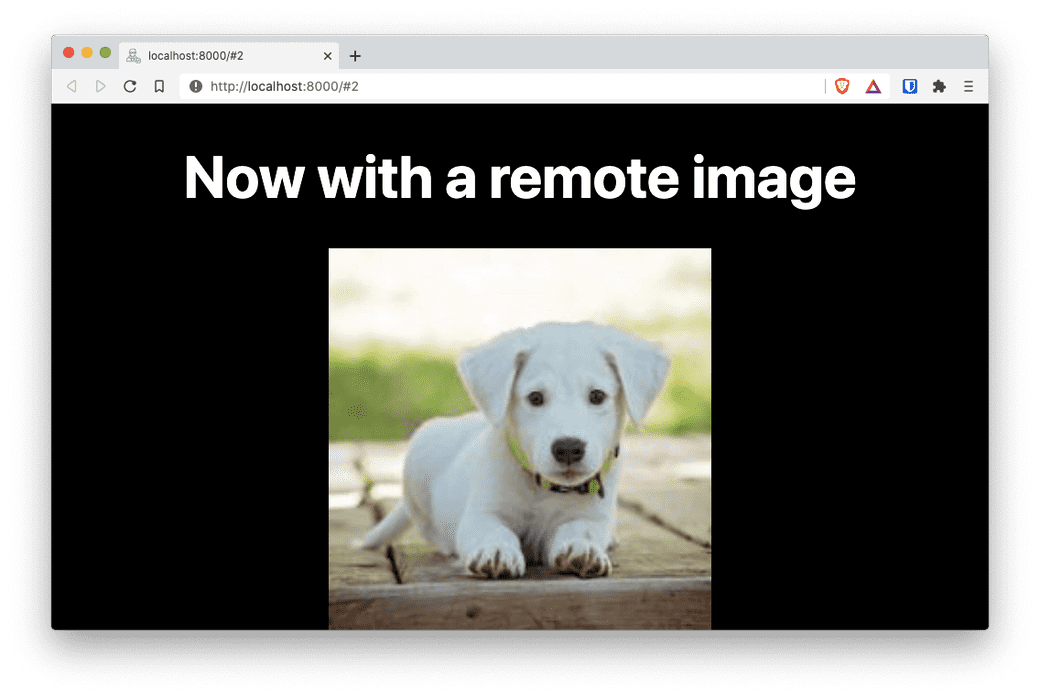 At the time of this writing there is an issue with mdx-deck 4.1.0 where the terminal keeps reloading. You can do a yarn add --dev mdx-deck@4.0.0 (downgrade mdx-deck) to temporary solve this issue. You might want to follow this Github issue for more information.

The first, and hopefully only, problem you are going to run into, is the fact that you can not include local images using the Markdown Syntax. The reason for this is because you are building a React project.

To include images in regular Markdown you could use something like ![](path-to-local-img.png)

So you can not include local images, but you can create Image components.

So lets create an images/ sub-dir and download an image from Unsplash and place it there.

Then lets add a new slide, on the slides.mdx file with the following content: 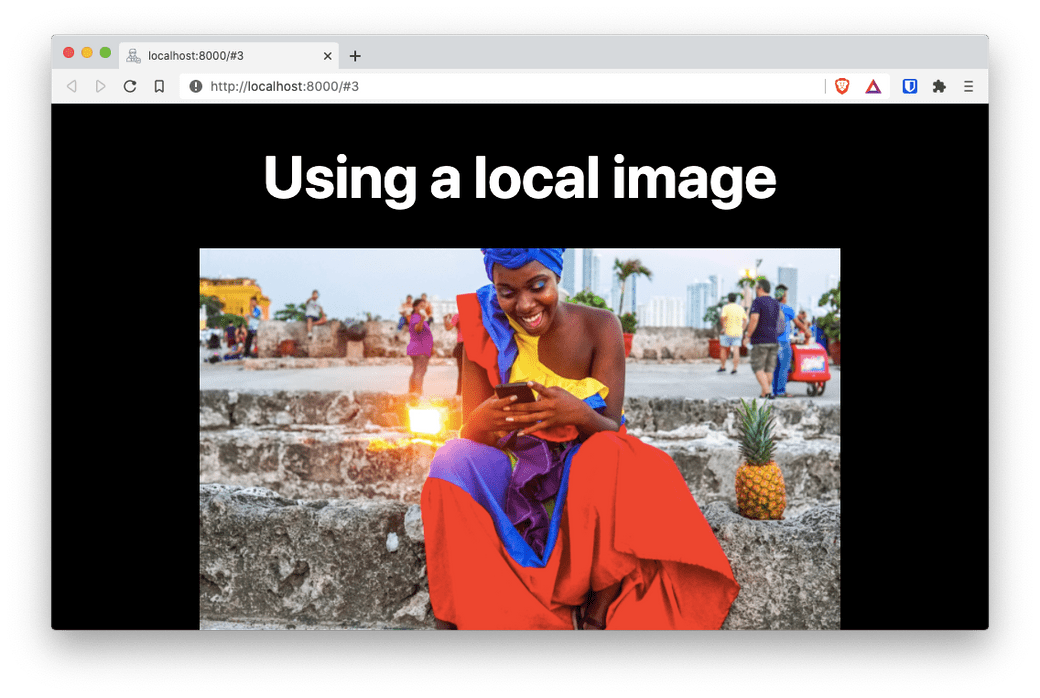 If you know react (and I'm assuming you do) you can see that you are including a local image path and then adding an <Image> component.

The <Image> component is provided by MDX Deck and made available by default.

You can used something like <img src={{ImgPath}} /> too. But <Image> is more powerful

What is a presentation without fancy colors.

So, now that you have created a basic deck with a handful of slides, lets give it some life bye adding brilliant colors provided by the yellow theme.

Add the following code to the top of your presentation so it covers all the slides: 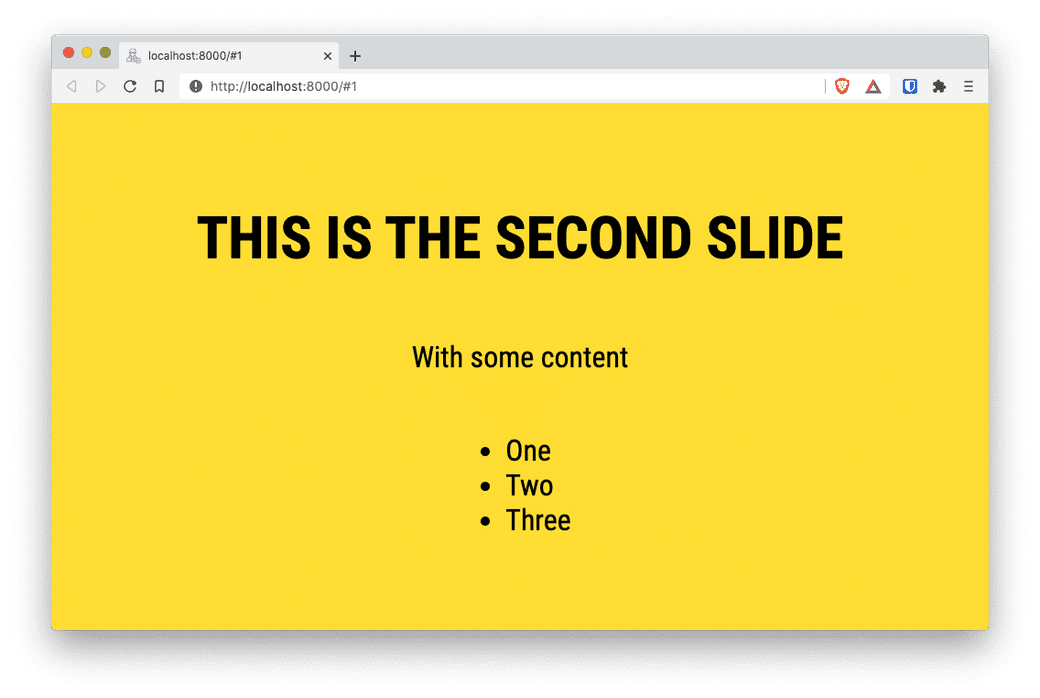 There is a list of included themes here. And you can create your own.

This is the best part of MDX Deck... At least for me.

For that we have to change the top of the file slides.mdx with the following:

And then add a new slide by adding the following at the end of the same file:

And voilà. We beautiful code in our new slide. 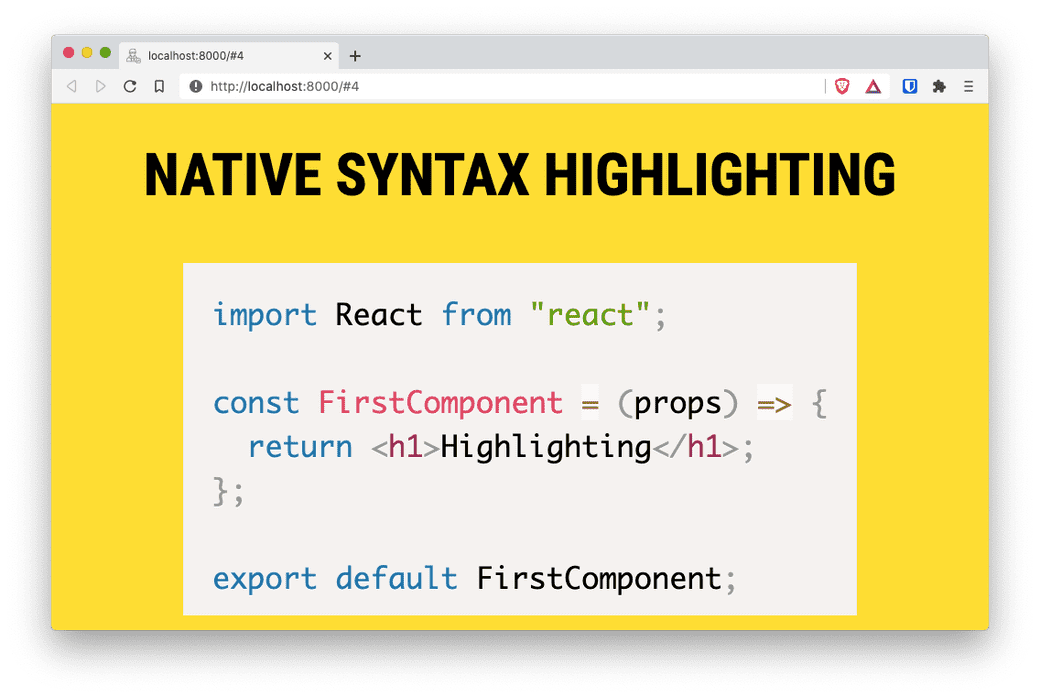 Latter we'll see how to use advanced syntax highlighting with the help of an external module.

MDX Deck creates a React app that behaves like a presentation. This means that you can create an use components.

Lets test that by creating the components/ sub-dir and add an empty file:

The content of our new component will be a simple button with a counter:

And in our presentation add the following "slide":

And the result is this new slide:

And just like that, you have a functional component inside a presentation. If you are following along, you can check that by clicking on the button the internal counter increments.

There are a couple of things to note here:

This is the scenario: You want to include a list of items in your slide, but you want to show each item only when you press the space bar or the "right" arrow.

For that, MDX Deck includes the handy Steps component.

When you enclose a list (or multiple components) between <Steps> and the </Steps> tags, you get a list that only show its items when the speaker presses the space bar or the right arrow key: 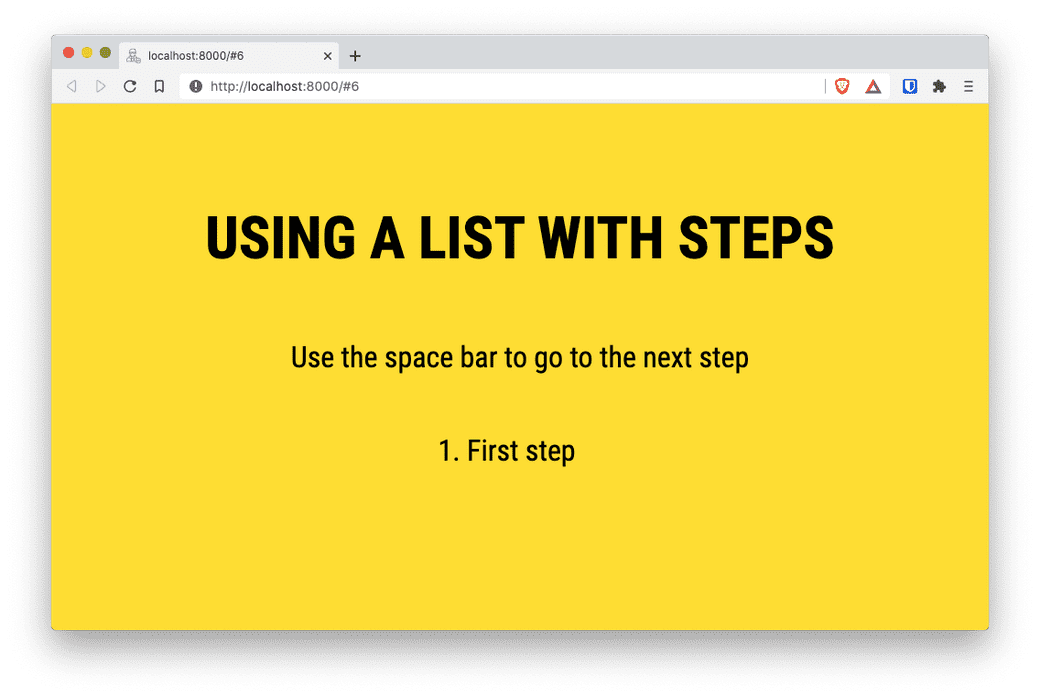 One important thing to note: There needs to be a space before and after the list items. Otherwise MDX wont recognize the list.

For those use cases, MDX Deck offers multiple layouts components

You have layouts for

Additionally, you can create your own layouts!

To test the Layout components, add the following slides to your deck:

That will render the following slides: 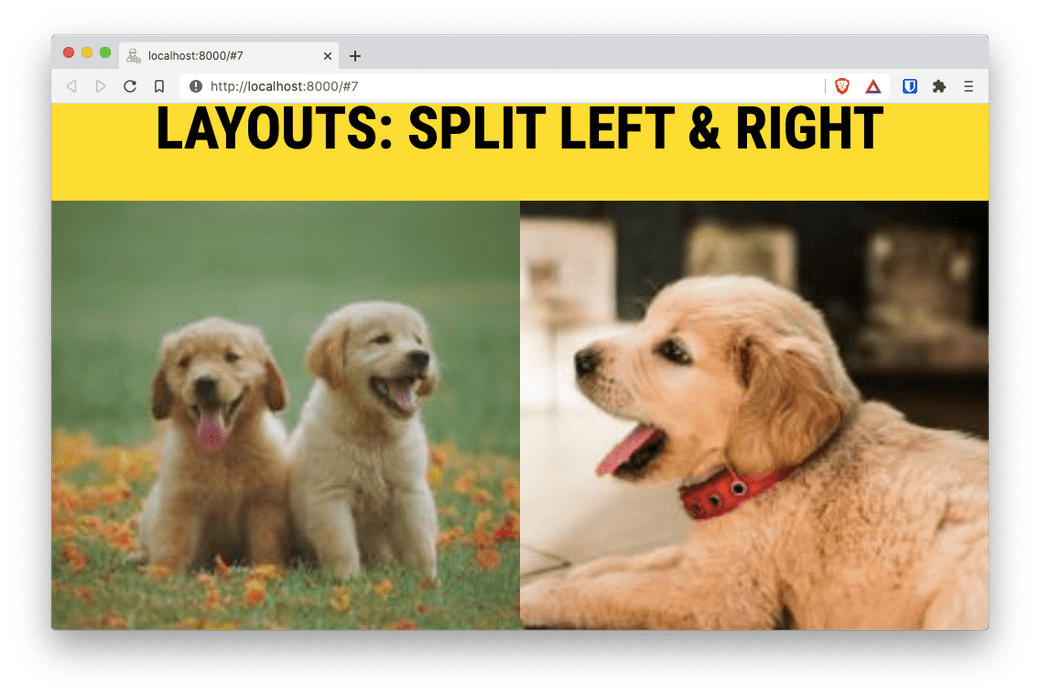 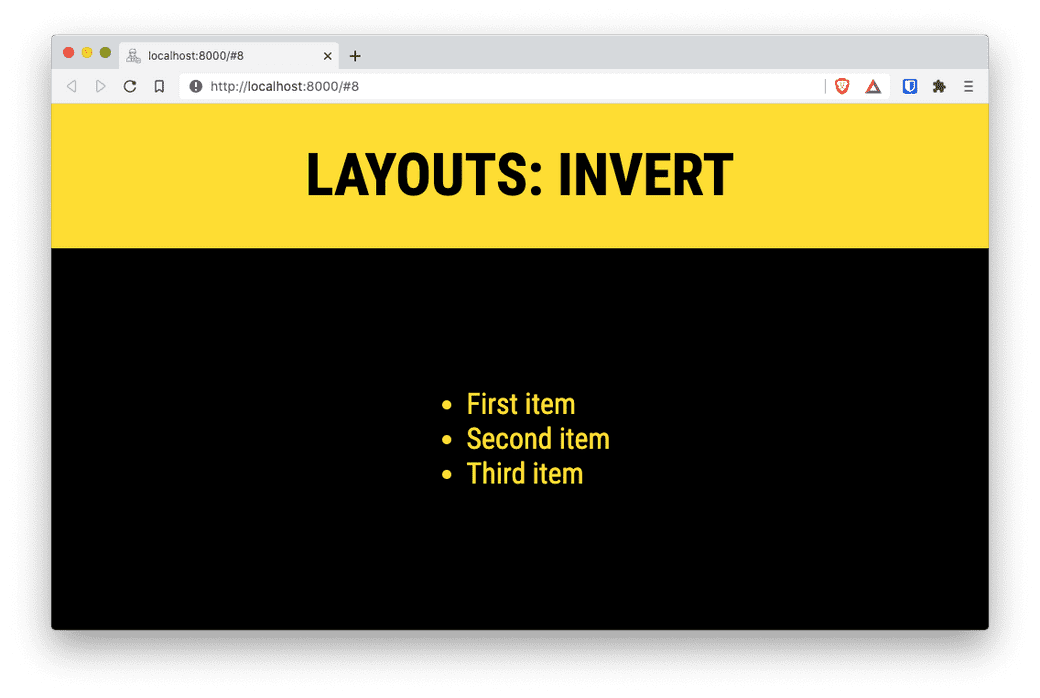 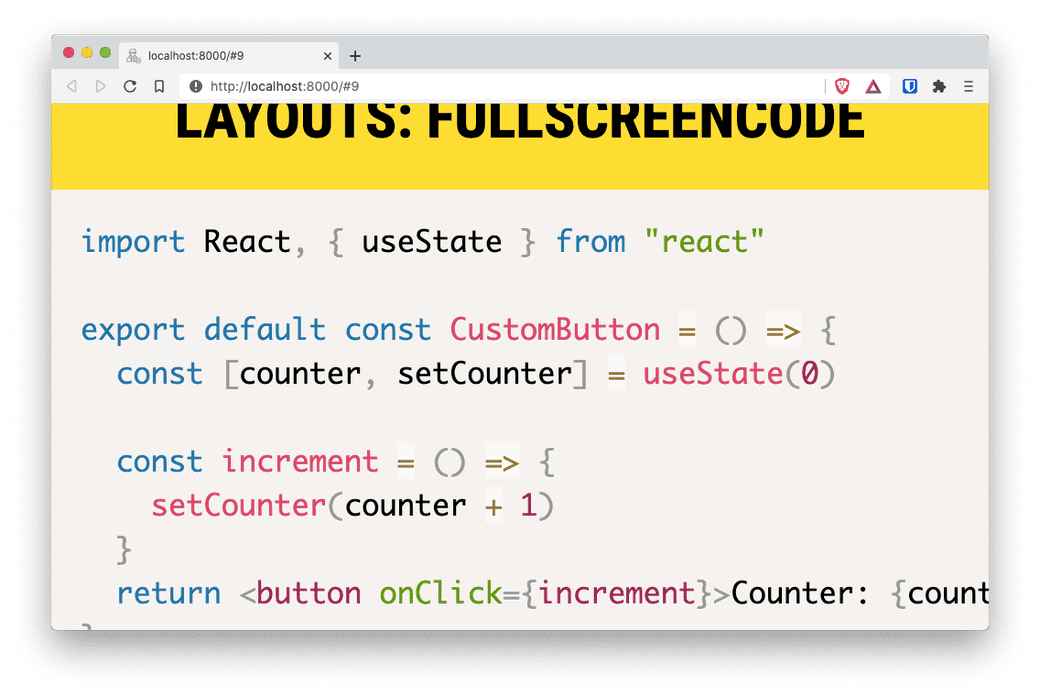 As you can see in the last one, <FullScreenCode> allows you to add code to to a slide that takes over the whole slide content.

There are still a lot of additional things we can do with MDX Deck. But for now lest focus on creating a "publishable" version of your presentation.

MDX Deck can build your slides into a single .html file and a bunch of .js and .css files. For that, we need to execute the mdx-deck command with the build parameter.

To make our life simpler, lets add a new script in the package.json file that calls the build step with the correct options:

And with that change done, lets build our project with yarn build: 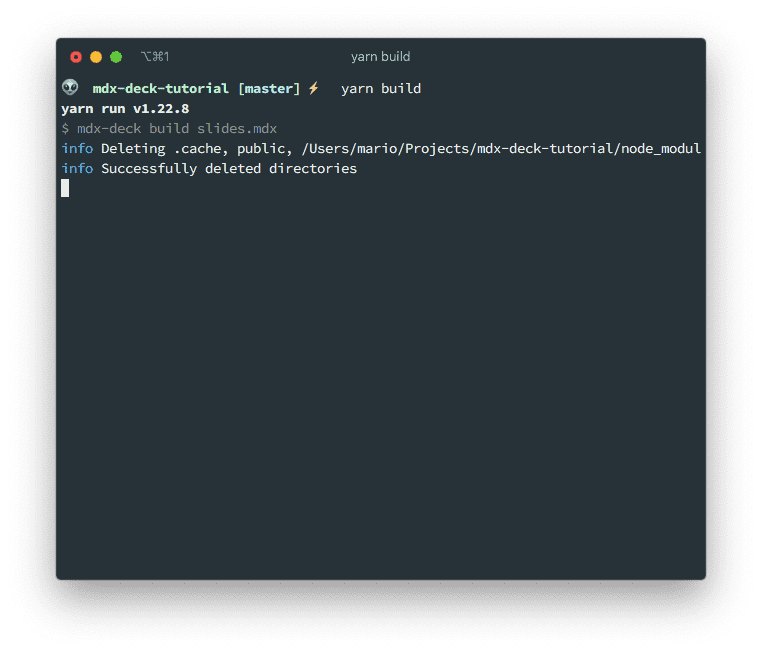 This will crate the public/ directory with the publishable files:

You can do a quick test of the result by using Python's http.server module: 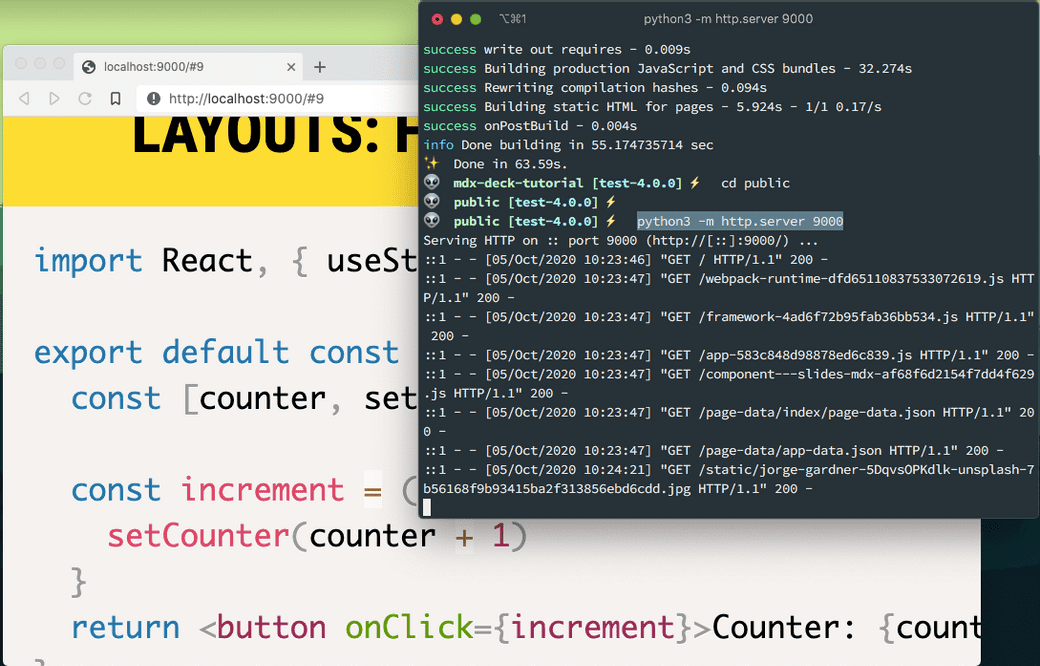 Actually this is my preferred way of presenting instead of using yarn start. The reason being that the this consumes much less resources since there is no watch process executing and the files we're using are static.

Also, you can publish this files in a web server with one caveat:

MDX Deck assumes that the files are going to be published on the Document Root of your web server.

So you if you are going to use something like GitHub Pages you need to use the Custom domain option.

In this first part we learned how to create a basic MDX Deck presentation with local images, syntax highlight and different layouts.

In the second part we'll be looking on how to publish the presentation on a custom domain and how to take the source code presentation to the next level.