Its very probable that you don't know what Intelephense is, or at least what it really is.

Intelephense is a Language Server Protocol, or LSP, implementation for PHP. Its not the only one, but in my opinion is the best one.

If you are still confused about what what you just read, let me give you a small history lesson.

When Microsoft launched its Visual Studio (Code) editor. It decided to have the language parsing, linting and formating of code be done by an external server. And that server has to follow an special implementation described in https://langserver.org/.

The great thing about LSP, is that is an standard and not an implementation. Allowing developers to write their own server and connect them to any editor like Visual Studio Code or even Neovim.

The LSP server can be written in any language but most of them are written in TypeSctipt.

For PHP there are several implementations:

But as I said in the intro, Intelephense is the best as of July 2020.

Intelephense, as any good LSP implementation, reads all the .php files in your project and extract all the function names from the function declarations. Also extracts any class names it finds and any defines it encounters.

Intelephense, and all the LSP implementations for PHP, includes the files that are in your vendor/ directory.

Then, using the DocComments of the function, class, definition, etc. Creates the pop-up documentation that you see in you editor when you start to type.

The problem, is that Intelephense recognizes all of the native PHP keywords, definitions and functions and the functions in your project, but external names, or names that come from external libraries are completely unknown to it.

The problem to solve is how do we make Intelephense recognize WordPress functions, Genesis Framework functions and ACF functions so it auto completes them.

The answer is we create and activate stubs!!!.

Intelephense uses the phpstormb-stubs to have an idea of which functions to auto complete.

Lets start with the easier one: WordPress.

Is the easier one because Intelephense already includes support for WordPress auto complete but is not active by default.

To activate it you have to go to your editor configuration and add wordpress to the parameter intelephense.stubs

Just open the configuration in the Intelephense section: 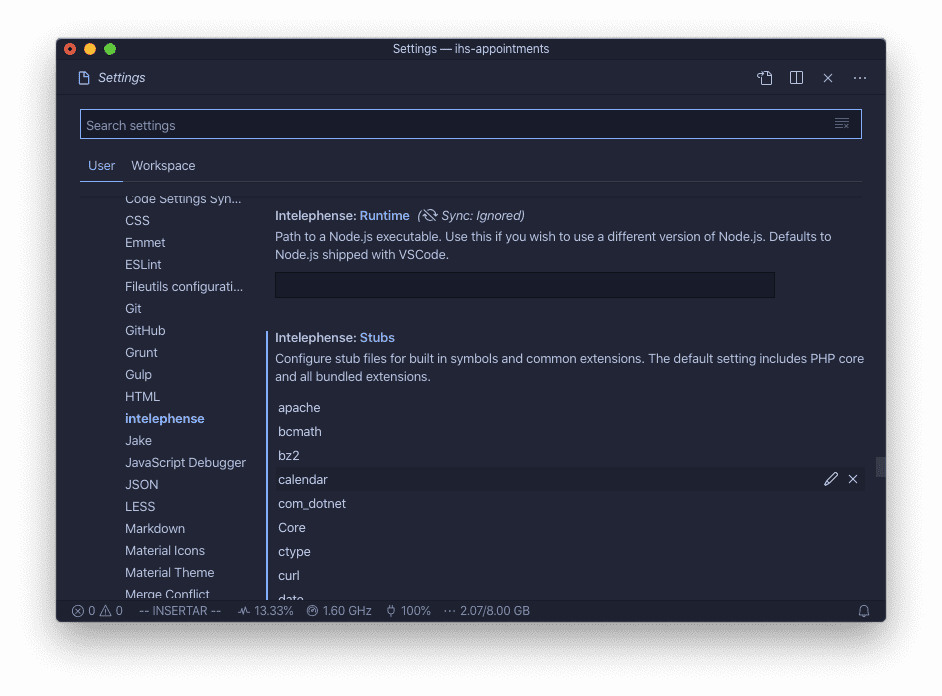 And you have WordPress support. Its that simple.

Neovim as of the time of this writing needs an external plugin called Conquer of Completion (or CoC in short) to use LSP servers including Intelepense. But there are plans support LSP natively.

So first install and configure CoC in your machine, and then execute :CocConfig.

This will open the con-settings.json file. There add wordpress to the list of stubs:

This one is also pretty easy... Actually easier than WordPress, but it has to be done per project.

You just need to require the paulthewalton/acf-stubs as a --dev dependency using composer.

As I said before, Intelephense, both in VSCode and Neovim will read the files in your vendor/ directory so you don't need to do anything else.

This one also has to be done per project and not per editor, but requires an additional step: You have to create the stubs yourself:

The first thing you have to do is to install globally the stubs-generator tool using composer.

This has to be done only once, not per project. 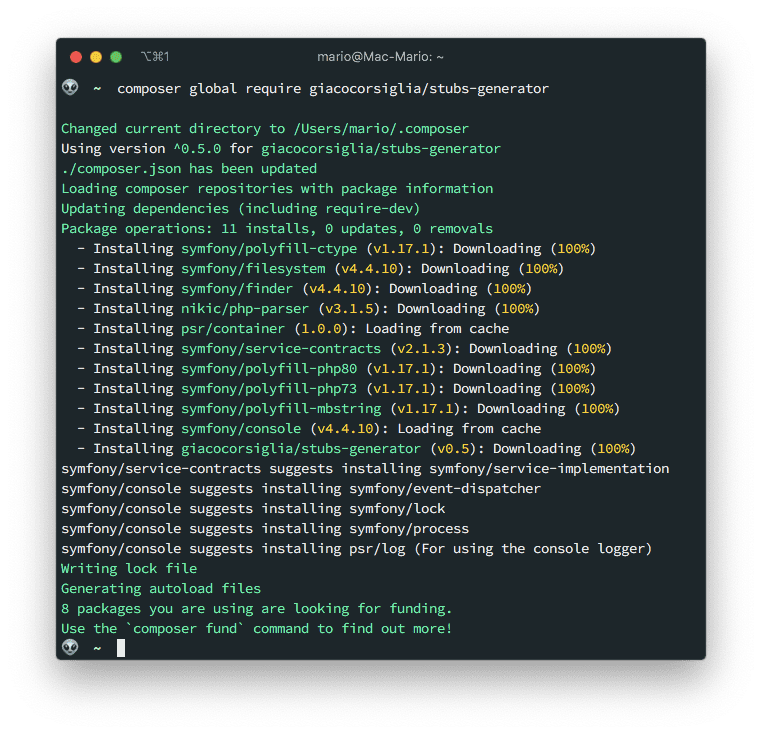 With the stub-generator command installed, place yourself into the project directory where you want to generate the stubs and execute 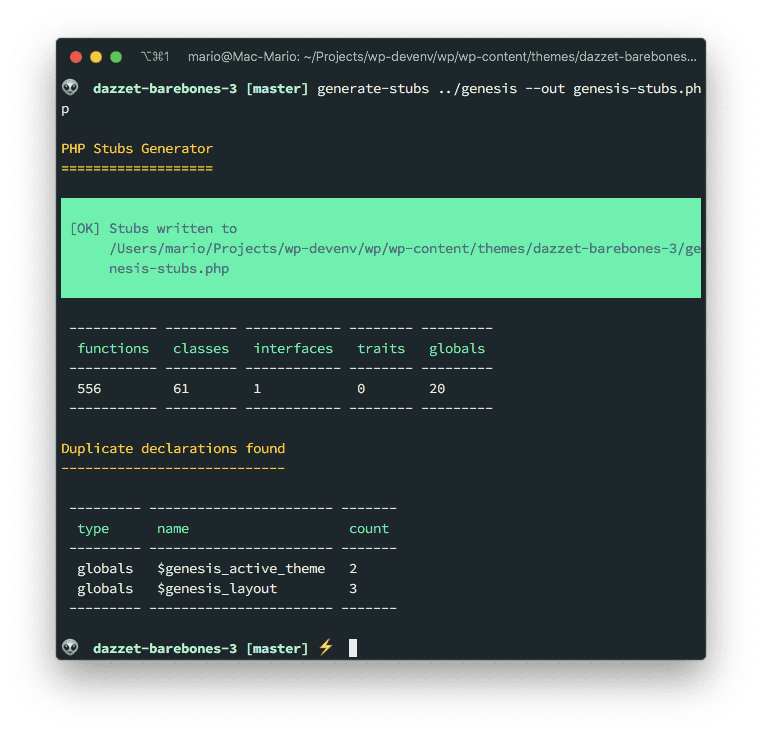 In this example I didn't use an absolute path but a relative path since its easier.

You can use any name, I selected genesis-stubs.php in this example.

Then, open Neovim or VSCode and test that the Genesis Framework Functions get auto copleted. 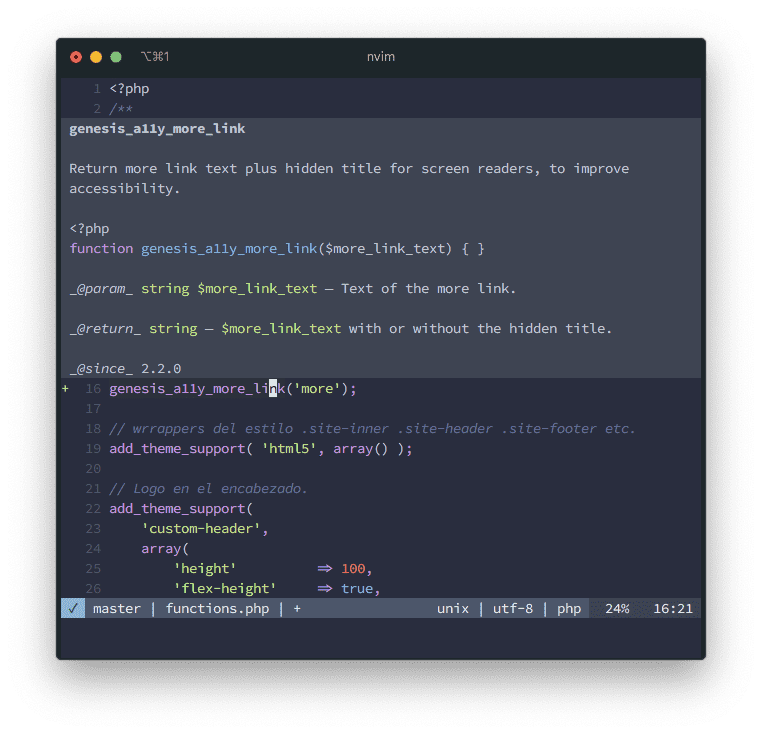 If all works. Add this new file to the .gitignore file so it doesn't get committed to git

And thats it... You have autompletion for Native PHP, WordPress, Genesis and ACF.