This is just a simple exercise on how to use Docker to locally run MongoDB and Mongo Express.

The main problem that we're going to solve, is how to run both images and have them communicate to each other since by default Docker doesn't allow that.

Additionally we're going to do this procedure using the docker command, and then using docker-compose.

The only prerequisite to follow allong is to have Docker installed.

If you are running a Mac with Homebrew you can install it with:

You should now have a docker menu in the Mac task bar:

To be sure that the installation as successful , run the getting-started image:

And visit the url http://localhost:8080 to get to the getting started application. 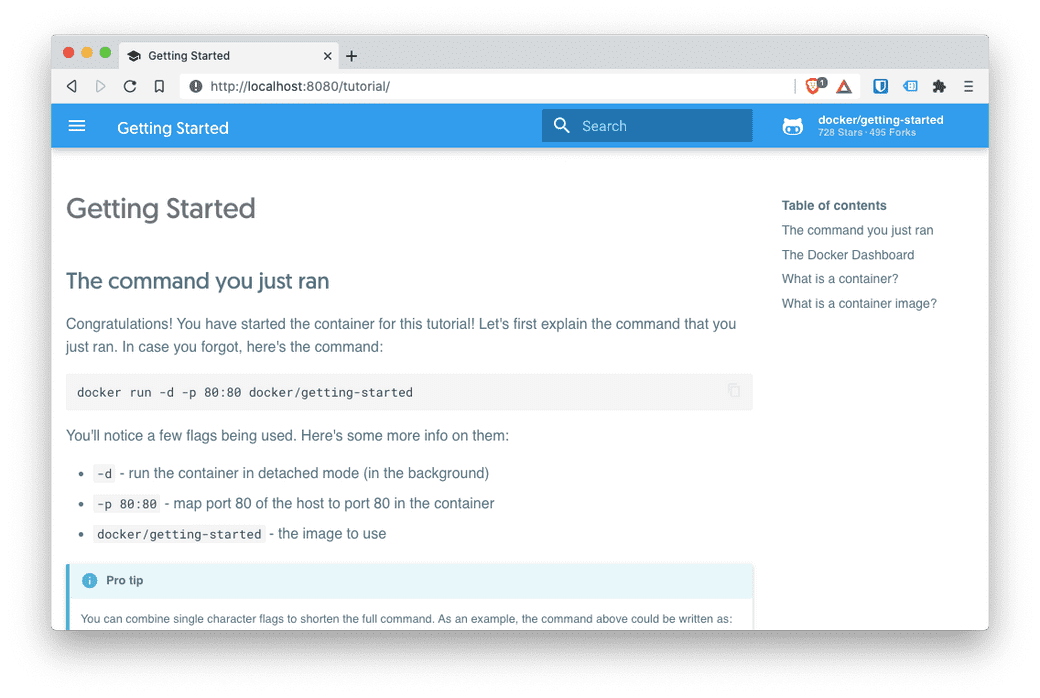 I'm not going to explain how Docker works. For that there are a lot of in depth tutorials. But I'm going to leave here a list of useful commands, some of them that we're going to use. So you don't have to go hunting into the documentation.

We do this to save up time since some images are very big:

Use the official image

Also use the official image

While the images download lest explain a little how Docker networks work.

The most important thing to keep in mind, is that each container has its own network, and that you can't access one network from another. That's why, by default, 2 containers can't communicate.

But we can create our own network!

As long as we deploy multiple containers in the same network they not only can communicate, but they can refer to each other just by the container name and not by IP.

Still, if you want to access a container from outside the network, say from your physical laptop, you have to communicate by their exposed ports.

Docker provides by default some networks

We can use some of those networks to make our containers communicate with each other, but to make our environment more portable, is better to create a new one:

To persist data we need to create a Docker Volume by passing the -v flag followed by the parammeters of the shared volume.

But to understand that, we need to talk about the 3 types of volumes that Docker supports:

Here you decide on the host system where to copy de data from the container.

The first path is the local path, and the second path is the container path with the information we want to persist.

Here you let decide Docker where in the local host, copy the data from the container. Under wraps, Docker will copy the data inside the /var/lib/docker/volumes/<random>/_data without us needing to specify it.

This is the one you'll probably use.

It's kind of a combination of the previous 2, where you provide a name for the host's path but Docker finally decides where in the local file system the information will be stored. You still need to provide the container's absolute path.

The advantage of this method is that you can reference this volume from another connected container.

Running the containers on a network

Now that we have a network created, we can boot our containers connecting them by the just created network.

But before we do that, I have to point out that both images require that you pass environment variables using the -e flag when issuing the docker command

So let's start the Mongo image using the name mongodb with:

To verify that it's running issue:

Also, the ME_CONFIG_MONGODB_SERVER is important, since that instructs Mongo Express to connect with which service. In our case it should be mongodb since that's the name we used in the previous step.

And if you go to http://localhost:8081 you should see something like this:

Removing the containers and the networks

Before you continue. You have to delete all the containers and networks with:

Doing it with Docker Compose

What we just did works great, but wouldn't it be nice if we could do that with just one command and without all those parammeters?

Well, it turns out that you can, by using the docker-compose command. Which is part of the Docker installation.

You just need to create a yaml file with the following sections:

Only version and services are required. But we're going to use the 4 sections to have a complete network with the 2 services.

So, re-creating the 3 commands we executed a while ago with docker-compose file would be:

One important thing to notice is that you pass environment values by separating the name from the value by = instead of :.

You can now visit http://localhost:8081 and verify that Mongo Express is running.

To stop all the services, you issue:

Hope you find this article helpful and is a big recommendation that you checkout a complete Docker tutorial.