Lately I've become more and more interested in Python for it's usage in Data Science applications, Machine Learning and the creation websites that has some kind of prediction options.

So I started looking at the different python web frameworks and it seems that Django is a safe bet if you are just starting to dip your toes in this world.

So I created this guide to show you how you can create a kick ass Django development environment with:

Is important to note that this is not a Django guide, nor a development tutorial. It's more a python tooling guide.

Obviously we need to start with Python. This is what is going to power up all of the tools and modules that we're going to use here.

By default Mac comes with an outdated Python, at least it was like that at the time of this article writing

Upgrading python to the current version (3.9 at the time of this writing) is pretty easy if you are using (and you should) brew package manager.

This will install the new commands python3 and pip3. This also means that you'll end up with 2 versions of python in your computer.

Its highly recommended that you do first a brew update before installing the new python to resolve some conflicts. In my case I had packages that required Python 3.7 and other Python 3.8.

This is somewhat different at what you find on most of the django tutorials: The usage of Pipenv instead of virtualenv or venv.

If you have a python background, the best way to explay pipenv is that is a combination of pip and venv.

And if you are a PHP developer, well, is the composer of Python.

And this will get you the command pipenv like so: 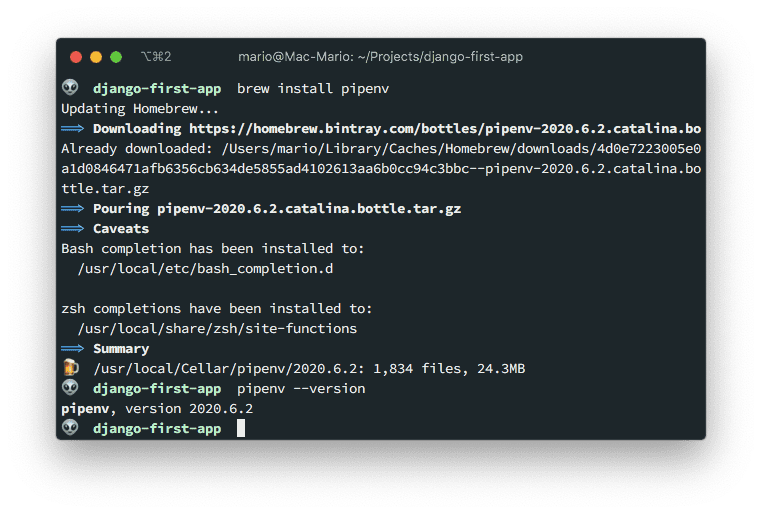 If you are more of a fan of installing packages with pip you could do:

If you are in Linux or Windows with WSL, then:

Notice that the method installs pipenv in your home directory in ~/.local/bin sub-directory, and that's why you have to export your PATH variable.

Additional information on how to install Pipenv can be found int the documentation site.

If you are developing a serious project, you have to use a really performing database. And, unless you are willing to pay serious dough, there is nothing better that PostgreSQL.

In MacOS, make sure you Xcode is up to date. This is necesary fo rthe psycopg2 installation:

I already created an in-depth tutorial on how to install PostgreSQL in mac if you are interested on knowing more.

Verify that you have all pre-requisites

Let just make sure that we have everything we need:

The important part is that pip3 and python3 refer to the same version.

Now that we have Python, Pip and Pipenv installed, we need to create a folder for a project, and then a virtual environment in that folder.

So execute the following:

The command pipenv shell should be enough to create the virtual environment, but I used differently in the example:

In my case I had issues because I had python 3.8 and 3.9 installed. So I had to pass the --version 3.9 flag to the pipenv shell command.

Additionally, it seems that pipenv has a bug when installed in Mac where it detects a virtual environment even if there is none yet. That's why I passed PIPENV_IGNORE_VIRTUALENVS=1. 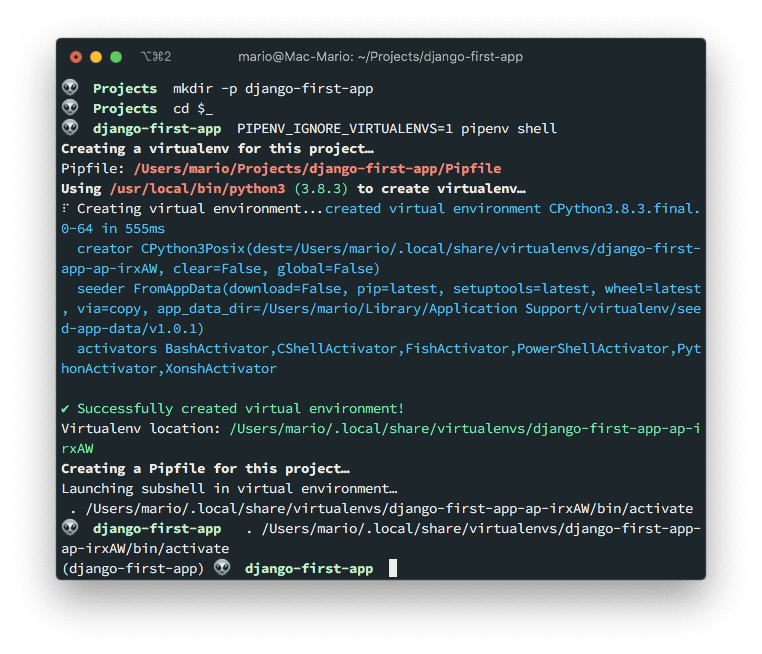 Also, notice how the terminal's prompt changed prefixing it with (django-first-app) and how we have a file called Pipfile with the following contents:

Now, this is very important: If you exit your terminal, or open a new terminal to work on your project, you need to execute pipenv shell before you execute any other python (or django) command

Where is the real virtual environment?

If you already know Python, you might be wandering where is the virtual environment placed? ... There is no venv/ folder or anything like it!

Well, its is your home dir:

That's one of the advantages of pipenv. It doesn't clutter your workdir with files.

We're ready to start up:

... We are ready to install Django!

Notice the . at the end. This prevent the creation of a new sub-directory.

I like to name my projects config since there is where most of the configuration files will be. A lot of people use the sufix _project, like crm_project or test_project, instead.

If you visit http://localhost:8000 you'll get the start Django start screen. 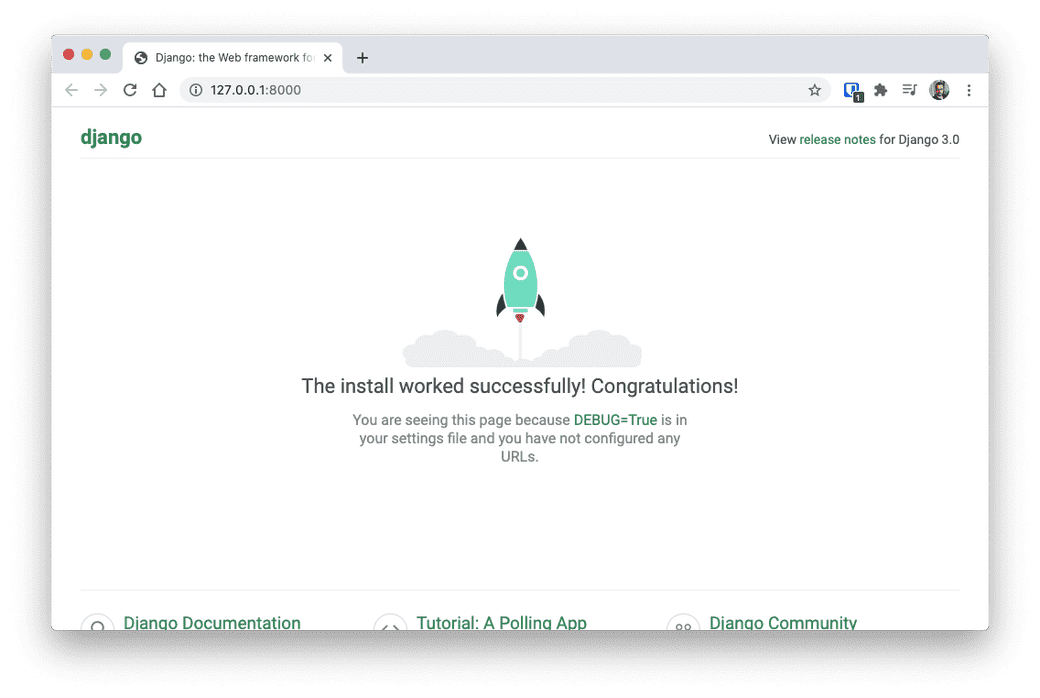 Before we go any further, lets do some cleanup in the config/settings.py file by removing some sensitive data and making Django read the environment for things like keys:

Remember config, is the name I chose for my project

All of this is achieved by making the following changes in the config/settings.py file:

It turns out that pipenv reads a file called .env, if exists, when you execute pipenv shell. And the values that are on .env are published as environment variables!

No you know why we changed those values in settings. Right?

So, lets make this .env file with the following content:

Obviously change the '*.' for the actual key

Now, stop the development server, exit the virtual environment and re-enter it so the .env file gets read.

I changed the port just for fun ;)

Visit http://localhost:8080 and verify that you still get a placeholder page.

I love making my development environments take care of all the details a project requires. Tasks like linting and formatting should be done for me before I commit to GitHub. That's why I use pre-commit in Python projects.

For JavaScript I use husky

But to have pre-commit work. I first need to initialize a repository.

Notice that I'm using main instead of master just like GitHub likes it.

And configure it by creating the .pre-commit-config.yaml configuration file with the contents displayed in the official website.

Finally install the hooks in your git repository.

The pre-commit install will generate the file .git/hooks/pre-commit

On the next time you execute git commit -m '...' some files will get downloaded. But this only happens the first time.

Now... A little test! ... Add 3 or four extra spaces in config/settings.py and try to commit those changes. 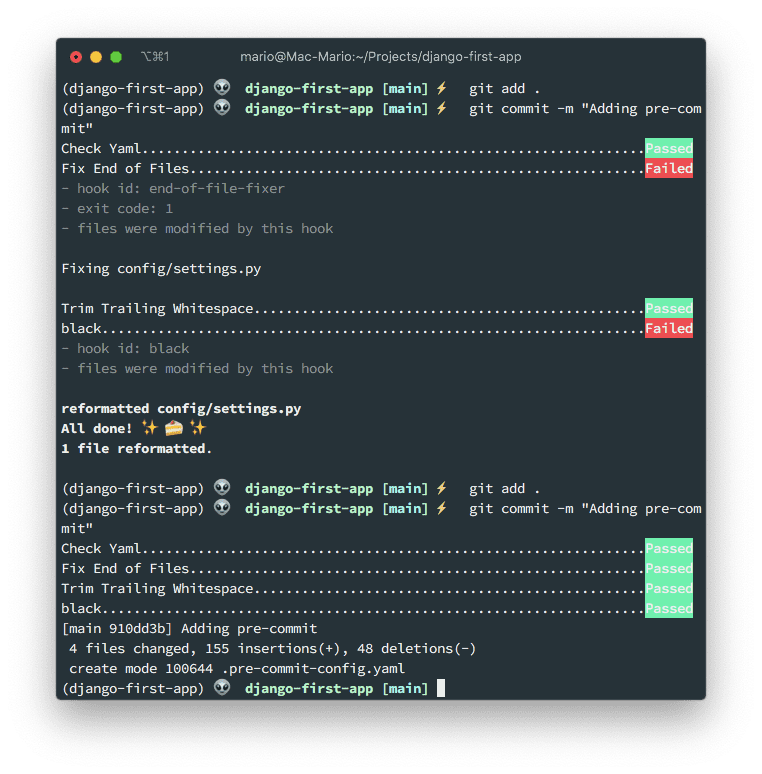 Our first commit failed, but at the same time if fixed the offending files. That's why re-adding and re-committing worked.

There is a very complete Django pre-commit tutorial in codeburst.io

I also love this part. Creating workflows so our code gets tested directly on GitHub.

But before we add the actions we have to create some tests to execute and some functionality to be tested.

As you can see, I created the test-path/ route, that when visited returns a Hello world message. To test this out visit http://localhost:8000/test-path/ and verify that you get the correct message.

The idea behind this small functionality is to have something to test against when we setup GitHub actions.

This is very easy since testing in Django comes out of the box. That's a reason to call Django a bateries included framework.

So, create a file called config/test.py with the following 2 tests:

As you can see, the second test tests the route we created previously.

To verify that the tests are executed, in the terminal issue (make sure that the virtual environment is still activated):

And this will output

Great! We have one valid test and one invalid test. This will come in handy when we configure GitHub actions.

To setup GitHub actions you need only to create a .yaml workflow file in the .github/workflows/ directory with the instructions on how to create a python environment that executes the testing functions.

In https://docs.github.com/en/actions, under the section building and testing python you can get to the example python workflow file which is a good starting point for a vanilla python project. The problem with that file is that assumes that you are using pip and not pipenv.

In this example use xxxxxx... for the SECRET_KEY actually. We need a non empty secret but just for testing.

A couple of things to point out about that workflow:

A more complete workflow file can be found in this gist from Anthony Lukach.

Up until now we have:

The only thing left to do is to create a repository (which you should know how to do) in GitHub and add it as a remote to our current project:

An go to GitHub, under the Actions tab to verify that the tests are running: 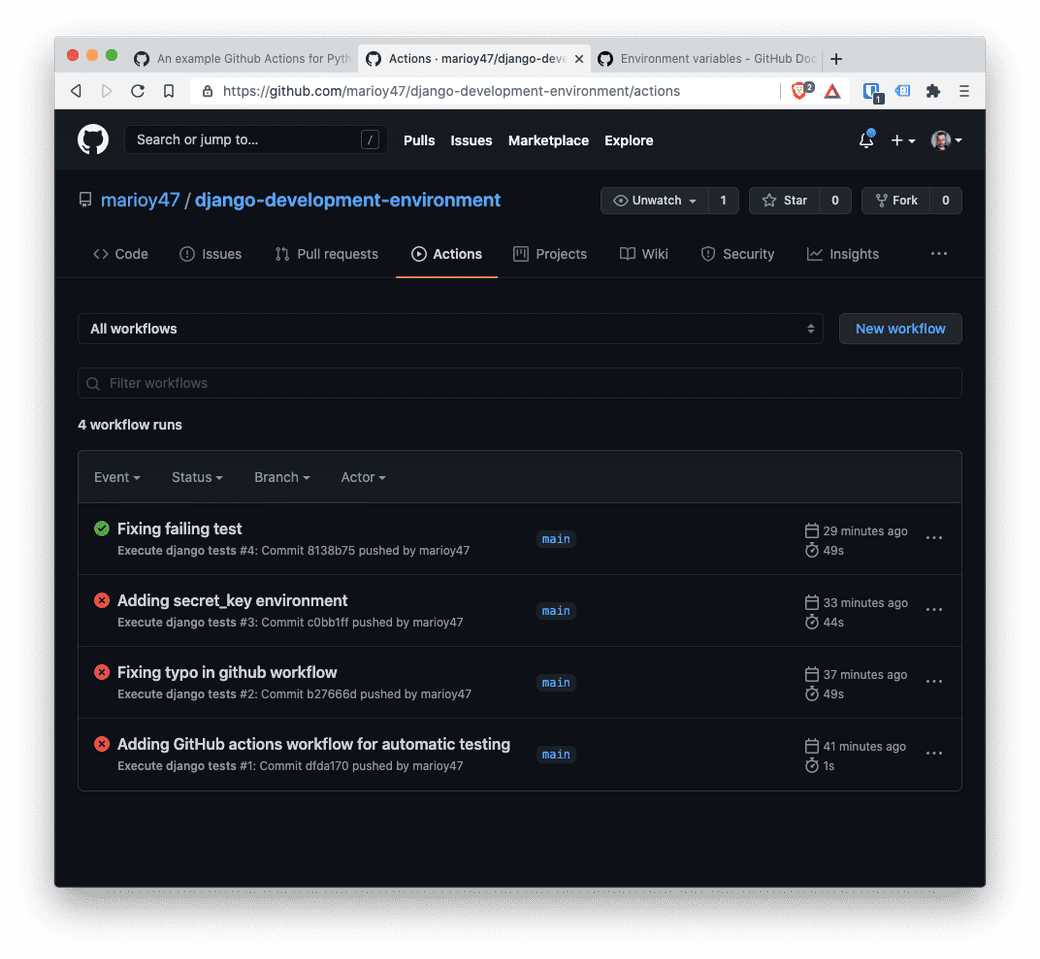 Notice that the firsts tests failed and the last is a success. That's because I when into config/test.py and changed the failing test:

If you take a closer look, you can see that now we assert that true is true: self.assertTrue(True)

Create and configure a PostgreSQL database

At the beginning we installed PostgreSQL and made it run at start up. Now lest install a Postgress Python driver so Django can actually connect to it.

In the terminal execute:

Let me explain what each of those commands do:

Then we need to modify config/settings.py, where the DATABASES variable is configured, to specify the connection values:

And finally we need to modify our .env file adding the values of the configuration we just changed:

We all of this setted up you have to:

This is done with:

As you can see, we just configured an development environment for Django, without the need of creating one application.

The idea is the final result will help you to continue on the creation of a real application. But that a topic for another article.